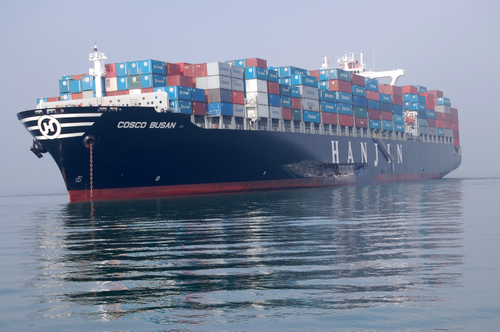 On the 7th November 2007 the Cosco Busan was involved in a large oil spill. At approximately 8:30 am local time, the container ship who was owned and operated by Fleet Management Ltd, Hong Kong struck the Delta tower of the San Francisco – Oakland Bay Bridge.  As a result of this allision over 53,500 gallons of IFO-380 heavy fuel oil to be released into the San Francisco Bay. 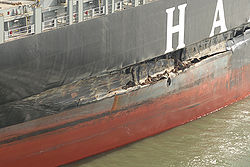 The gash in the hull was approximately 100ft!

At this time Arnold Schwarzenegger was the Governor of California. He called a state of emergency which allowed access to additional funding and personnel in order to help with the clean up.

After investigation there were a number of incidents which were discovered to have attributed to the allision. Pilot John Cota ignored many of the health hints associated with the use of prescription drugs. His vision and his judgement were impaired as a result and effected his ability to use the onboard radar and navigation equipment correctly.

It was also discovered that the Cosco Busans radar was not working accurately and as such led to the use of an electronic chart.  The Master Mao Cai Sun was found to have incorrectly identified some symbols on the electronic charts and an inappropriate use of test guides. This was coupled with insufficient and ineffective communication between the ship and the vessel traffic service and also between the master and the pilot.

The Environmental Impact caused by the allision

As a result of the incident the oil spilled heavily. Fuel spread quickly due to the tidal mechanics of the San Francisco Bay. A large are of the Californian North Coast was effected. This included the Golden Gate National Recreation Area,  Ocean Beach, Marin Headlands, Crissy Field, Fort Point, Baker Beach, China Beach and Kirby Cove.

It was discovered that 2,519 birds were lost by the incident.  1,084 birds were collected alive, of which 664 ultimately died and 421 were rehabilitated and released.   The remaining 1,856 birds were collected already dead.  There was approximately 200 miles of coastline  covered in oil which also caused other severe problems  such as seal deaths, and the deaths of the eggs laid by herring.