On Saturday 9th June 2011 mv Deneb, a 101 metre long 5350T vessel operated by Xpress Container Line became unstable whilst undergoing unloading operations at Algeciras, Spain.  Operations were halted by MAL and SG portainer at 03:30. At 15:30 the vessel began listing to starboard, and  continued to list until she was resting on her starboard side with the bow submerged.  At the time the cause of the instability was unknown.  The crew and stevedores decided to abandon ship and jumped overboard in to the water.  No serious injuries were reported however the captain sustained an injury to the mouth, and was attended to by paramedics, along with another crew member, a further crew member was taken to hospital for treatment of superficial injuries. 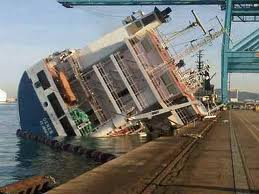 The vessel was carrying 118T of bunk oil and 26T diesel fuel before it began to list and there was concern that these would escape and pollute the harbour, therefore booms were placed around the vessel in an effort to prevent this.

The salvage vessel Svitzer assisted by mv Rotterdam unloaded the containers from the capsized vessel, Deneb then the oil and diesel were pumped from the vessels tanks. The vessel was re-floated on 16 July 2011.

There were no reports of serious injury and investigations are being conducted.