On Thursday 18th January 2007 MSC Napoli, a 275 metre (900foot) long container ship was caught in stormy weather in the English channel and suffered structural damage.  Cracks began to appear in the engine room which became progressively worse and resulted in a 1metre by 0.5metre (3ft by 1ft 6in) hole developing in the starboard side of the vessel.

The vessel began to take in water through this hole and the crew were forced to issue a distress call and abandon ship in favour of a lifeboat.  The distress call was received by Falmouth Coastguard at 10:30 GMT and 2 helicopters were dispatched from RNAS Culdrose to assist the crew, which consisted of 26 members of various nationalities, those being Bulgarian, Ukraninan, Turkish, Indian, Filipino and 2 young British cadets.

The weather and conditions were described as “pretty horrific” by the rescuers due to the severe south-westerly gale force nine winds (more than 50mph) and the 8 to 9m (26 to 30 foot) swells.  The first helicopter took approximately 45 minutes to airlift 13 of the crew, the remaining crew were picked up by the second helicopter and they were all returned to Cornwall.  The crew luckily escaped serious injury but were treated for hypothermia and extreme seasickness.

The vessel was listing dangerously and had to be moved so on Saturday 20th January the vessel was towed by French tugs (a salvage deal had been made with a French team) and deliberately beached at Lyme Bay near Branscombe to prevent further damage being sustained in deep waters. The original plan had been for the vessel to be taken to Portland harbour in Dorset however due to the stormy conditions the Maritime Coastguard Agency decided the best course of action would be to ground her.  The vessel was held in place by the tug boats.  By Sunday two long gashes were apparent, one on each side of the vessel just above the water line.  The tugs remained to hold the vessel in place and she remained firmly aground however continued to roll in the storms.  At high tide the rescue team edged the vessel closer to safety and pumped in sea water as ballast, the vessel was also surrounded by 1 kilometre (0.6 miles) of oil-protection boom in an attempt to minimise pollution of the area.

200T of oil mixed with water leaked from the vessel, however the ship’s tanks were not punctured.  The MCA began the operation to remove the fuel from the vessel on Monday 22nd January, as the fuel had to be heated before it could be off-loaded to a waiting vessel the process took a week to complete.  At the same time a salvage team of 8 boarded the vessel to begin analysis of the situation, this led to a team of divers plugging a gap in the vessel the next day.

The salvage operation began in earnest a week later, a team of 20 Dutch salvage operators acted in removing the containers from the vessel.  The angle at which the vessel was wedged was very acute and crushed containers and spilled goods were littering the vessel.  Heavy chains had to be secured around the containers to facilitate their removal from the vessel, the conditions made this a very treacherous process and extremely dangerous for the salvage crew carrying out the task, the tasks carried out by the salvage divers was particularly hazardous as they had to enter the vessel which had been flooded with oil and water.  The containers were removed from the Napoli by a large barge crane and were then transferred to a barge by a smaller barge crane.  The barge then proceeded to Portland with each batch of containers, the containers were removed in priority order with the potentially dangerous cargoes being removed first.  The process of removing the containers from the vessel lasted five months with the last containers being removed from the vessel on Thursday 17th May 2007.  During this process several cracks in the vessels hull were repaired to ensure the integrity of the vessel was maintained throughout the process. 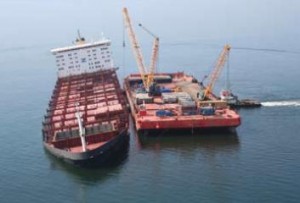 During the cargo removal phase of the salvage operation naval architects were planning the most efficient way to move the vessel once it had been emptied of containers.  The MCA declared that a decision regarding the Napoli would not be taken hastily and on Monday 9th July 2007 the vessel was re-floated and towed 500 metres to enable an inspection by a dive team.  According to the MCA this move also prevented further deterioration of the vessels structure and damage to the environment.  The hull examination began the next day and took a team of 20 divers 2 days to complete.  The survey revealed that the vessel was more severely damaged than expected.  The vessel was therefore re-beached at high tide on Thursday 12th July whilst an action plan was formulated. 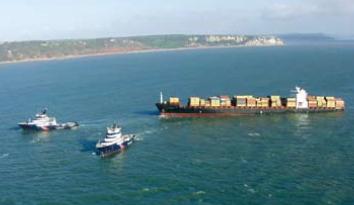 It was decided that the vessel should be broken up with tugs and the stern sunk.  The bow would be towed away for recycling.  To this end the salvors worked overnight on Thursday 12th July to remove ballast from the vessel in the hopes that this would assist in breaking up the vessel.  On Saturday 14th July tugs attempted to flex and break the hull during the spring tide, unfortunately the strategy was unsuccessful.

The MCA had to formulate a new plan and so consulted he Ministry of defence (MoD) about using explosive charges to separate the hull.  The MoD agreed and a 1000 metre exclusion zone was placed around the vessel in addition to navigational warnings being issued.  At 14:10 on Tuesday 17th July charges were remotely detonated .  The explosions were successful and resulted in the deck plates being separated.  Further charges were detonated the following day but were not as successful as those of the previous day.  On Thursday 19th July a third round of explosions were triggered.  This round of explosions was successful and the vessel was broken up.

In late August the bow was towed to a holding point outside Belfast harbour before being taken to the Harland & Wolff shipyard where it was broken up for scrap and recycling.  The stern and accommodation block remained grounded about a mile away from Sidmouth.  Damaged sections of the vessel were sent off for analysis to determine what happened during the storm in which the vessel was damaged.

The Dutch salvage team who had overseen the operation up to this point were awarded the contract to lift the stern.  The final phase of the operation to remove the ship began on Thursday 8th November 2007 with pieces being cut from the accommodation block, the work continued until Friday 16th November when the final section of the four tonne accommodation block was cut and removed.

Work continued on dismantling the vessel until Sunday 18 November when weather conditions forced a halt to the operation and barges and tugs working alongside the Napoli had to move to safety as southerly gale force seven winds caused the vessel to move and list more than 30 degrees.

Salvage of cargo at Branscombe Beach

The vessel had been carrying 2,323 containers when it hit difficulties, including 158 containing potentially dangerous chemicals.  114 containers were lost overboard and the MCA tried to locate these units, at least 50 of which washed up on Branscombe beach.  Beach combers began to “salvage” cargo from the containers which had washed up on the beach. The cargoes taken included BMW motorbikes, car parts, hair products and disposable nappies.

Under the Merchant Shipping Act 1995 it is an offence to remove items from a wreck without declaring it, it is also an offence to refuse to surrender items or conceal the fact of possession so technically most of the cargo which was removed was looted.  Police warned people not to remove cargo from the beach, but if they did then to complete a form and hold the goods for 28 days should the owner claim return of the goods during this period, after this point if no claim was made to the cargo then the scavenge would become legal. The police closed the roads to the beach to halt the scavenging but this did not deter certain organised gangs.  The majority of the goods were later legally declared however there were a number of BMW motorbikes which were never recovered.  BMW declared in October 2007 that any BMW property which had been legally declared did not need to be returned.

The environmental impact of the wreck

It is believed that the English Channel would have been polluted for years had the decision not been taken to deliberately beach the vessel.  As it is over 200 tonne of oil escaped from the vessel, the vessel was surrounded by 1 kilometre of oil-protection boom in an attempt to minimise pollution on Sunday 21st January 2007.

The Royal Society for the Protection of Birds reported on 23rd January 2007 that 200 gulls and 900 guillemots had been found suffering from the effects of oil, some as far away as Torbay, roughly twenty five miles from the site of the wreck.  Animal rescue teams battled to save as many birds as possible.

The Financial Impact of the wreck

The London Steamship Owners Mutual Insurance Association revealed the insurers estimate of the bill for the wreck, including the salvage operation, clean up, vessel and cargo costs was £ 120 million.  The second highest wreck cost to date, eclipsed only by the $ 2.1 billion cost incurred by the Exxon Valdez incident.

The vessel salvage operation alone cost in excess of £ 50 million and Devon County council spent £ 44,000 on the clean up and a further £320,000 was spent on the operation by Devon and Cornwall police and Fire services.

The local councils have been left severely out of pocket as they received roughly a third of what they spent from the insurance.

A marine lawyer handling the compensation claims advised that these claims were in excess of £ 65 million.

Under the Merchants Shipping Act 1995 vessel owners and insurers are entitled to limit their liability.  In the case of the MSC Napoli the legal limitation fund was capped at £ 15 million.  This was vastly under-estimated and resulted in losses for all parties concerned.

The liability of a cargo vessel is calculated using a formula which takes in to account the ship’s gross tonnage.  Clearly if the example of MSC Napoli is to be used then the formula is inadequate and should be re-visited.