On 5 October 2011 mv Rena, a 47230dwt vessel owned by Costamare ran aground on the Astrolabe reef 22 kilometres outside port of Tauranga in New Zealand.  The ship’s Captain and naval officer have been charged with several offences in relation to the vessel grounding, they are both currently on bail and next due to appear in court on 29 February 2012.  It is alleged that ship documents were altered after the grounding in an attempt to cover the mistakes made.  The officers are being charged under both the Maritime Transport Act 1994 and the Resource Management Act 1991 for operating a vessel in a manner likely to cause danger and discharging a contaminant, they are also being charged with perverting the course of justice.  The captain faces four charges and the naval officer faces three charges, each with a penalty of up to 7 years imprisonment. 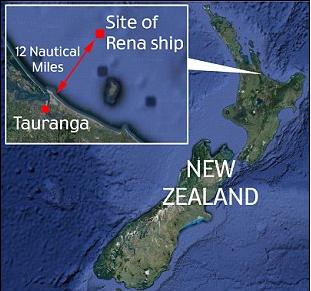 The vessel leaked hundreds of tonnes of oil causing what New Zealand’s authorities describe as the worst maritime environmental disaster in their seas.

The New Zealand Transport Accident Investigation Commission is expected to release a full report on the incident in July 2012.