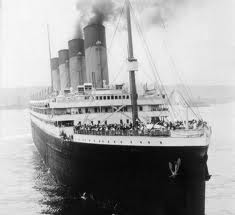 RMS Titanic was a British registered vessel, her actual port of registry was Liverpool.  The vessel was a 4 funnelled ocean liner which was built for use as a transatlantic passenger and Royal Mail service between Southampton and New York.  The vessel was constructed at the Harland and Wolff shipyard in Belfast.  Ireland Titanic was, on her maiden voyage, the largest vessel afloat and was owned by White Star Line.

Titanic was 882 feet 9 inches (269.11 metres) in length and 92 feet (28.04 metres) in breadth. Her gross tonnage was 46,328 tons. Three propellers were driven by two four-cylinder, triple-expansion, inverted reciprocating steam engines and one low-pressure Parsons Turbine.  Steam was provided by 25 double-ended and 4 single-ended Scotch-type boilers fired by 159 coal burning furnaces that gave her a theoretical top speed of 23 knots.

On April 10th 1912 RMS Titanic sailed from Southampton with 2,200 passengers and crew on board.   She collided with an iceberg at 11:40pm on the 14th April and later sank at 02:20am on the 15th April 1912. 1517 people died and 700 survived.   On the night of the collision the temperatures were freezing and the sea was calm. In the days leading up to the collision there had been a number of iceberg warnings which resulted in a new course being drawn up.  A further warning from the vessel Amerika warned the Titanic that icebergs lay in its path. Lookout officers spotted the iceberg ahead and sounded the bell alarms 3 times. 37 seconds later the Titanic scraped the iceberg on its starboard side (right side)this caused the hull to buckle in several places and rivets below the waterline popped out over a length of 299 feet (90 m).  This opened the first six compartments (the forward peak tank, the three forward holds and Boiler Rooms Nos. 5 & 6) to the sea;  the ships design allowed for a total of four  compartments to be flooded whilst remaining afloat.

The entire impact lasted approximately 10 seconds. Captain Smith, alerted by the force of the impact, arrived on the bridge and ordered a full stop. The watertight doors had been immediately shut by Murdoch (the first officer). Within ten minutes of the collision the five forward compartments were completely flooded to a depth of 14 feet (4.3 m).  The fifth and sixth water-filled compartments weighed down the ships bow enough to allow more water to flood the vessel, accelerated by secondary flooding as regular openings in the ship’s hull became submerged. Additionally, about 130 minutes after the collision, water started pouring from the sixth into the seventh compartment over the top of the bulkhead separating them.  Following an inspection by the senior officers, the ships carpenter J. Hutchinson and the Titanic’s shipbuilder Thomas Andrews (which included a survey of the half-flooded two-deck postal room) it became apparent that the vessel would sink.  The lifeboats were ordered and a distress call sent out with an estimate of an hour before sinking. The vessel pumps could buy just a few extra minutes.

It later transpired that the vessel lifeboats were built for a total 1,178 passengers, but they did not sail to capacity. The first lifeboats capacity was 65 passengers but sailed with just 28.

This was the largest peacetime maritime disaster in history.  Of the 2,223 passengers there were passengers of clear wealth but yet also severe poverty from a variety of nationalities.

It took 3 years to build the Titanic, after setting sail on the 10th April 1912 it was the maiden voyage which was never completed.  Higher proportion of men died to women due to the “women and children first” policy.

The wreckage was subsequently discovered and investigates in 1985.  It is said that the ship design and the increased steerage and middle class accommodation was met at the expense of safety.  The ship was luxurious and contained a telephone system, a lending library and a large barber shop onboard. The first-class section had a swimming pool, gym, squash courts, Turkish bath, electric bath and a verandah café. The first class common rooms were adorned with ornate wood paneling, expensive furniture and other decorations while the third class general room had pine paneling and sturdy teak furniture.  First-class passengers paid a high fee for the luxury. The most expensive one-way trans-Atlantic passage was £870 (equivalent to almost £64,000 in 2012) or $1,363 ($31,000 in 2012).