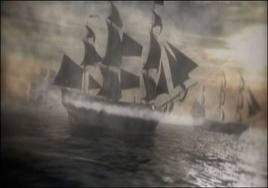 HMS Victory with her fleet

HMS Victory was a Royal Navy 100 gun ship of the line which was lost whilst returning to UK from Tagus Estuary on 5th October 1744 when she was separated from the fleet in the English Channel during a severe storm.  It was assumed that she had been wrecked on the Casquets, a group of rocks near Guernsey after wreckage was discovered on Guernsey.  all hands on board at the time of the wreck were lost, this was over a 1000 sailors.

In May 2008 Odyssey Marine Exploration discovered a vessel on the seabed which was believed to be the HMS Victory, this was confirmed in February 2009. The ship was believed to be carrying gold bullion estimated to be worth £125 million today