The Mary Rose is undoubtedly the most famous of Tudor warships. She was commissioned by Henry VIII. Unfortunately not much is known about the construction of the vessel however it is believed to have been launched from Woolwich in 1515 and was intended to be the flagship of the fleet.

The Mary Rose sank 19th July 1545.  The French attacked the British fleet in the Solent and were able to pound them due to the flat calm. The Mary Rose heeled over and sank during the attack which led the French to believe they had sank her, however according to survivor accounts she heeled over due to wind and as the gun ports on the lower level had not been closed she took on water and sank. It is believed she was manned by her usual crew complement of between 450 and 500 hands at the time she sank, of which only 25-30 sailors are believed to have survived.

The wreckage of the Mary Rose was discovered in 1967 during the Solent ships project initiated by Alexander McKee. Side-scan sonar was used to locate the wreck and located a sub-seabed anomaly.  This led to Mary Rose (1967) Committee formation which proceeded to lease the area of seabed around the site for £1 per annum.  Diving parties to the wreck confirmed that the wreck was indeed that of the Mary rose and subsequently led to the ship being raised in 1982.  along with the Mary Rose there was also a wealth of Tudor artefacts discovered.

The Mary Rose had to be kept wet constantly to avoid degradation.  In 2011 a preservation project begun during which the Mary Rose will be dried out for long term preservation, this project is ongoing and further details can be found on the official Mary Rose website. 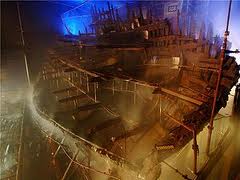 The Mary Rose is currently based in Portsmouth Historic Dockyard along with a museum which houses the wealth of Tudor finds discovered when she was raised.